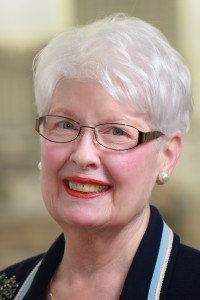 Dorothy Daly, a major shareholder in Beacon Business Bank, has long been active in the company, which was originally acquired by her late husband, Denis Daly Sr., in 1996. She and her husband had become involved in community banking more than 40 years ago. Denis Sr. came from a family of Irish bankers and emigrated to the U.S. in 1957. He began his career as a bank teller, worked his way into progressively senior positions and was ultimately able to acquire major interests in several banks.

“We had a basic philosophy about community banking: we were here to help people when they had financial problems and there to provide the capital when they wanted to start and to grow their businesses. That is the spirit that we brought to the bank then and now. Our goal remains that we want to be superb community bankers.

Mrs. Daly, who holds a degree in nursing from St. Francis School of Nursing in Evanston, IL., has also supported, with her husband, numerous nonprofit and community organization boards.

“The essence of community banking always involves being willing to work with people and businesses in the communities that they served. That’s what we strive for at Beacon Business Bank.”

Back to Officers & Directors